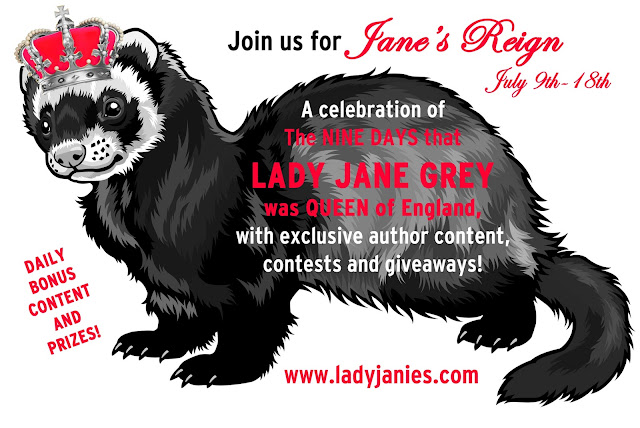 Today is the first day of Jane's reign as queen and oh do we have fun things for you!

As we said before, we're celebrating every day of Jane's reign with giveaways and exclusive content. So, let's get right to it!

First off, giveaway! Spread the word about Jane's Reign and get a chance for some amazing MY LADY JANE swag!

Tune in tomorrow at 12pm Pacific Time for a liveTweet viewing by all three Janies (and whoever would like to join us) of a movie that was one of our biggest inspirations in writing our book: THE PRINCESS BRIDE. You can watch it on Netflix or AmazonPrime. Answer a few of our questions correctly and you might win a hilarious Princess-Bride-related prize.

And now, finally, click the jump for A DELETED SCENE from My LADY JANE that's never been shown anywhere else.
***WARNING: contains spoilers for the end of MY LADY JANE.

A burst of light surrounded him. He was a boy again. Naked. He grabbed the nearest item in his reach, which happened to be a frying pan, and used it to shield his manly bits.

“I’m so sorry, Gracie,” he said. “I know you and Archer. . .”
She gave him a sharp look that said, don’t presume that you know about me and Archer, and Edward stopped talking.
She jabbed at a burning log. Sparks flew and rose up in the night air. Her face was golden in the fire’s glow.
“Archer was a fool, but he cared about E∂ians,” she said at last. “You’ll honor your promise, won’t you? Even though he’s dead?”
“Yes,” Edward said without hesitation.
“Good.” She stared into the fire. “You know, your granny believes that every person who walks the earth, no matter how they seem on the outside or what they believe themselves to be, is actually an E∂ian. We all have the animal inside us, waiting to come out.”
That was all very well and good to think about, but Edward was getting cold. Frying pans are not terribly wind resistant.
“Yes,” he said, his teeth starting to chatter. “Whatever they are, I consider them all my subjects: E∂ians and Verities, men and women and children. Dogs, even. Foxes in their burrows. Rats.”
Gracie’s green eyes lit with the usual mischief. “Rats? A plague-filled kingdom, then.”
“Okay, maybe not rats,” he said.
“But E∂ians who become rats. There are a few of those in the Pack, you know. They’re your subjects.”
“Yes,” he conceded. “But I feel as if we’re getting off topic.”
Her lips twitched. “Are we?”
“The point is, I will provide for all of my subjects—E∂ians and Verities and anything in between—as best I can. I will be a good king. A better king.”
She looked up at him solemnly. “I believe you.” Her gaze dropped to the frying pan, and her dimples appeared as she stifled a smile.
Edward sighed. “Oh come on, people, will one of you throw me a bone, here?”
The men looked to Gracie. She nodded. A large bearded fellow offered his cloak to Edward. It smelled like a dead goat, but it would have to do.
Posted by Jodi Meadows at 9:00 AM