It's time to start counting down! It's six months until the release of the first book from our new series, the Marys! The first one is MY CONTRARY MARY, coming to bookstores on June 22, 2021. 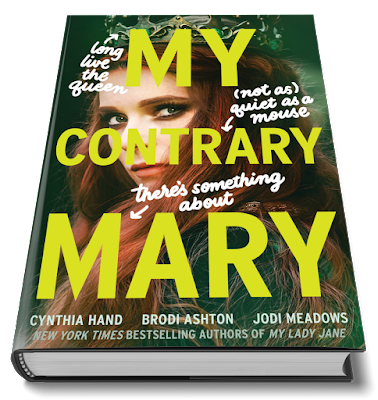 Here's the short pitch: MY CONTRARY MARY is THE PRINCESS BRIDE meets REIGN (the TV show about Mary, Queen of Scots). Because the book stars MARY, QUEEN OF SCOTS. And also FRANCIS, the crown prince of France, Mary's betrothed. And also ARI, who you will not have heard of, because we totally made her up, but she's the daughter of NOSTRADAMUS, who you might have heard of.

Welcome to Renaissance France, a place of poison and plots, of beauties and beasts, of mice and . . . queens?

Mary is the queen of Scotland and the jewel of the French court. Except when she’s a mouse. Yes, reader, Mary is an Eðian (shapeshifter) in a kingdom where Verities rule. It’s a secret that could cost her a head—or a tail.

Luckily, Mary has a confidant in her betrothed, Francis. But things at the gilded court take a treacherous turn after the king meets a suspicious end. Thrust onto the throne, Mary and Francis face a viper’s nest of conspiracies, traps, and treason. And if Mary’s secret is revealed, heads are bound to roll.

Fun, right? This book was so much fun to write. It kept us laughing as we worked on it, that's for sure. And we really needed to laugh this year.

Now it's time to field some questions we imagine you might be having:

Imaginary Future Reader: The description uses the word E∂ian--is this book a sequel of MY LADY JANE???!!! Are we going to see Jane and G and Edward?

US: MY CONTRARY MARY is like all of the other Janie books, in that it is a standalone. But unlike the rest of the Janie books, it takes place in the same world as MY LADY JANE. There are E∂ians (people who can change into an animal form) and Verities (people who think that shapeshifting thing is just wrong). Mary, if you'll remember from her brief appearance in MY LADY JANE, can change into a mouse. And yes, you might spot some characters you already know and love if you look hard enough.

IFR: So do I have to read MY LADY JANE first?

US: No. You'll be able to understand this book just fine all on its own. But you might enjoy it a teensy bit more if you've recently read MY LADY JANE.

IFR: Does this mean Mary, Queen of Scots, is going to get a happy ending?

IFR: What about Francis?

US: What about him?

IFR: Does he die?

US: Um, well that would be a spoiler, now wouldn't it? You'll have to read to find out.

IFR: But you told us that Mary doesn't get her head chopped off.

US: Yes, but that's kind of a given. Like we said, it's what we DO with these books.

IFR: But obviously, if Mary's going to get a happy ending, Francis can't die.

IFR: Sure you can.

US: You're making us uncomfortable, imaginary reader. Maybe Francis dies, as he does in history, of an ear infection or something, and then Mary meets the love of her life--some guy named Larry--and lives happily ever after. You don't know. That's why you have to READ THE BOOK.

US: We will say that it probably the most romantic book we've ever written. That's all we'll say. Mary and Francis really do have feelings for each other that are clear right from the beginning.

IFR: So Francis doesn't die pointlessly and he and Mary end up together and THIS IS ALL I EVER WANTED FROM LIFE.

US: *running away* See our BOOKS page for more information about MY CONTRARY MARY as we go!!!

Posted by Cynthia Hand at 4:07 AM No comments: