One Year Ago Today, We Were in England!

One year ago today, the LadyJanies were at Jane Grey's home of Bradgate! It's now a park. Please enjoy our video, in which Brodi has her hand down her pants twice.

Email ThisBlogThis!Share to TwitterShare to FacebookShare to Pinterest
Labels: England, On This Day, videos

Hello, Lady Janie Cynthia Hand here. It's a special day today! Our fellow Janie, Jodi Meadows, has a new book that is hitting the shelves today! It's the second (and final) book in the Orphan Queen series, and it is (this kind of goes without saying) FANTASTIC, so we thought we'd take the time to tell you about it (in case you didn't already know. . .)

Here's some info on the first book of the series, THE ORPHAN QUEEN.

Wilhelmina has a hundred identities.
She is a princess. When the Indigo Kingdom conquered her homeland, Wilhelmina and other orphaned children of nobility were taken to Skyvale, the Indigo Kingdom’s capital. Ten years later, they are the Ospreys, experts at stealth and theft. With them, Wilhelmina means to take back her throne.
She is a spy. Wil and her best friend, Melanie, infiltrate Skyvale Palace to study their foes. They assume the identities of nobles from a wraith-fallen kingdom, but enemies fill the palace, and Melanie’s behavior grows suspicious. With Osprey missions becoming increasingly dangerous and their leader more unstable, Wil can’t trust anyone.
She is a threat. Wraith is the toxic by-product of magic, and for a century using magic has been forbidden. Still the wraith pours across the continent, reshaping the land and animals into fresh horrors. Soon it will reach the Indigo Kingdom. Wilhelmina’s magic might be the key to stopping the wraith, but if the vigilante Black Knife discovers Wil’s magic, she will vanish like all the others.
Jodi Meadows introduces a vivid new fantasy full of intrigue, romance, dangerous magic, and one girl’s battle to reclaim her place in the world.
I feel extra fond of OQ because I have a wonderful memory of driving around Virginia with Jodi Meadows, back when we were first conceiving of MY LADY JANE, and the three of us each reading from our works-in-progress. I read a little from the draft of my book, THE LAST TIME WE SAY GOODBYE, Brodi read from a hilarious book about a teen who runs a poker ring that she was working on (that I'm going to be poking at her to finish until my dying day), and Jodi read from THE ORPHAN QUEEN. And it was just. so. freaking. good.
And now you all can read it too, and it ends on a doozy of a cliffhanger, so you'll want to move right on to THE MIRROR KING to see how it ends.

Wilhelmina has a hundred enemies.
Her friends have turned. After her identity is revealed during the Inundation, Princess Wilhelmina is kept prisoner by the Indigo Kingdom, with the Ospreys lost somewhere in the devastated city. When the Ospreys’ leader emerges at the worst possible moment, leaving Wil’s biggest ally on his deathbed, she must become Black Knife to set things right.
Her magic is uncontrollable. Wil’s power is to animate, not to give true life, but in the wraithland she commanded a cloud of wraith mist to save herself, and later ordered it solid. Now there is a living boy made of wraith—destructive and deadly, and willing to do anything for her.
Her heart is torn. Though she’s ready for her crown, declaring herself queen means war. Caught between what she wants and what is right, Wilhelmina realizes the throne might not even matter. Everyone thought the wraith was years off, but already it’s destroying Indigo Kingdom villages. If she can’t protect both kingdoms, soon there won’t be a land to rule.
In this stunning conclusion to THE ORPHAN QUEEN, Jodi Meadows follows Wilhelmina’s breathtaking and brave journey from orphaned criminal on the streets to magic-wielding queen.
I can't wait to read it. . . 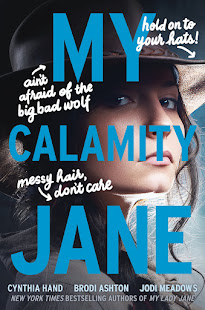